Chicago Gift Store Succumbs to the Power of Bacon

CHICAGO, April 1, 2014 — ENJOY, AN URBAN GENERAL STORE, a gift store in Chicago’s Lincoln Square neighborhood known as a "one-stop shop" for gifts for all ages and occasions, is announcing their re-concepting. Effective April 1, ENJOY will become an all-bacon store or ENJOY, AN URBAN BACON STORE (urbanbaconstore.com).
On the hooves of successfully selling bacon-themed novelties since 2005, ENJOY’s owner Rebecca Wood has decided to go whole hog with the concept. "Sure, we can offer our customers a tin of bacon flavored mints from Accoutrements or a pair of socks from Portland-based Gumball Poodle emblazoned with ‘bacon,’ but what if everything in the store was bacon or, even better, if the store actually became bacon?”
ENJOY's brightly blue colored walls will be re-painted a red and white marbled color to resemble bacon, and the floors will be carpeted in a red and white shag to invoke the feeling of walking on meaty strips. ENJOY’s jewelry cases will be converted to meat lockers.
Wood hopes to make the store into a multi-sensory experience. “If it truly is an Urban Bacon Store and you leave without feeling hungry or your cholesterol levels spiking, we've not done our job," she says.
Bacon-scented air fresheners and incense diffusers warming bacon grease will fill the store with a smoky, intoxicating aroma of just-fried bacon.
Hungry shoppers can pig out on sizzling bacon candy, bacon cotton candy, savory bacon flavored bread sticks and Pig Boogers—a bacon bits flavored treat. To wash down the salty snacks, customers can make their own fizzy Bacon seltzer water.
To make the experience complete, ENJOY’s employees (ENJOYees) will wear life-like pig head masks and greet customers with a cheerful snort. New company uniforms will be accented by bacon candy necklaces and cuff bracelets made out of bacon.
Stephanie Edwards, manager of eCommerce and Social Media, says the new retail concept is in response to the seemingly never-ending allure of the meaty treat. “We were bacon ourselves crazy trying to answer the question… how can we offer customers a more bacon-driven experience? The answer became as clear as rendered fat, we needed to become bacon... be the bacon.”
Because only a fool believes that this new store concept will stay fresh longer than an order of crispy bacon, ENJOY, AN URBAN BACON STORE will re-re-concept as an Urban General Store, featuring 1,000’s of gifts (bacon-themed and not), on April 2, 2014. 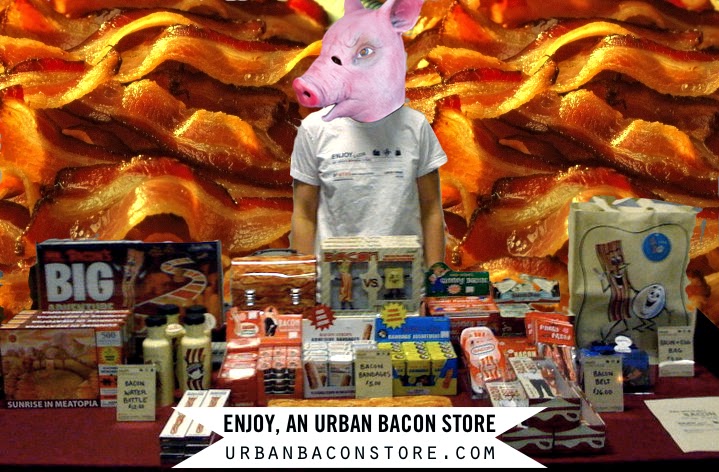 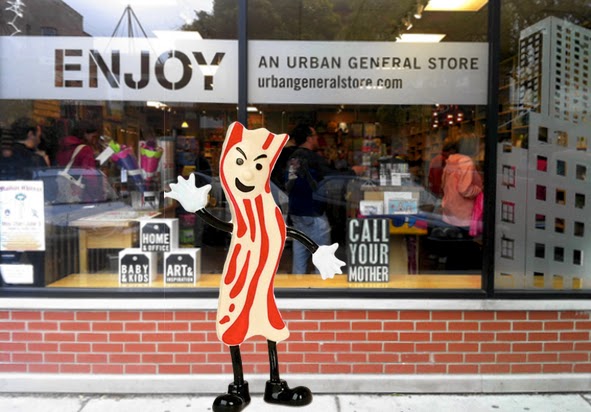 Chicago Magazine Chicago SHOPS This annual guide to some 1,000 Chicagoland stores is the shopper’s bible. No other publication puts what you want at your fingertips, be it stores for stationery, shoes, clothes, discount furniture, gifts, or handbags. Organized by category and cross-referenced by neighborhood or suburb, you’ll reach for this handy reference throughout the year. Also find here the top local designers making unique jewelry, handbags, and clothing, and beauty and fashion tips from local experts. Priced at $4.99, Chicago SHOPS is sold separately from Chicago magazine and can be found on newsstands throughout the Chicagoland area. You can also purchase a copy online.